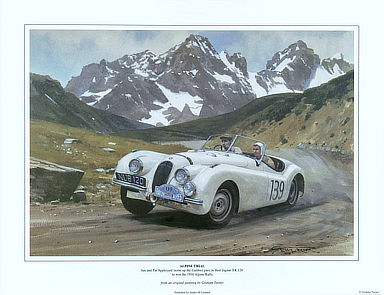 Alpine Trial © Graham Turner
Price incl. VAT: 39 €
Ask a question about this product
Turner, Graham
Description
The small motorsport art print ‘Alpine Trial’ by Graham Turner shows Ian and Pat Appleyard storming up the Galibier pass in their Jaguar XK 120 to win the 1950 Alpine Rally. Competitors who finished the event unpenalized, meeting all the target times, were awarded the Coupe des Alpes (Alpine Cup). Those who managed three such feats in a row, were awarded the Coupe d'Or (Gold Cup). Ian and Pat Appleyard were the first team to achieve this in 1952.

The Galibier pass is a mountain pass in the southern region of the French Dauphiné Alps. The highest point of the road at that time was at an altitude of 2658 m.