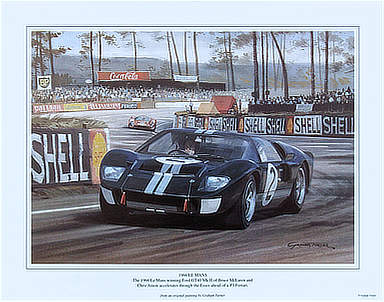 1966 Le Mans © Graham Turner
Price incl. VAT: 39 €
Ask a question about this product
Turner, Graham
Description
The small motorsport art print ‘1966 Le Mans’ by Graham Turner shows the winning Ford GT40 Mk.ll of Bruce McLaren and Chris Amon accelerating through the Esses ahead of a P3 Ferrari. As the Ford GT40 Mk.ll cars of drivers McLaren-Amon and Miles-Hulme were running within seconds of each other as the race neared its end, a decision was made in the Ford pits to have the cars finish side by side in what hopefully would be considered a dead heat. But because of a rule that in case of a tie, the car that had started further down the grid had travelled the farther distance, McLaren and Amon who had started 60 feet behind Miles and Hulme, were declared the winners.