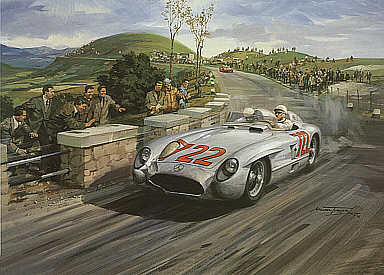 1955 Mille Miglia © Michael Turner
Price incl. VAT: 149 €
Unfortunately sold out!
Ask a question about this product
Turner, Michael
Description
Driving the fabulous 300SLR Mercedes, 25 year old Stirling Moss scored one of his greatest victories in the gruelling Mille Miglia of 1955. Partnered by Denis Jenkinson, whose pace notes helped to guide him round the treacherous 1000 mile course, Moss took the lead at Rome. He then proceeded to confound the tradition that 'he who leads at Rome never wins' by racing on to a famous victory, the first ever by a Briton and in the fastest time ever recorded of 10 hours 7 minutes and 48 seconds, an average speed of 97.9 mph.
Michael Turner's motorsport art print '1955 Mille Miglia' shows the 300 SLR thundering down the Raticosa Pass during the later stages of the race, to the delight of crowds of enthusiastic spectators.
Limited Edition
The print edition corresponds to the number carried by Moss' car to denote his start time (7:22 a.m) from Brescia.
Overall Height ca.
46
cm
Overall Width ca.
58
cm

Healey in the Cotswolds
44 €
www.template-joomspirit.com