The Aviation Art of Nicolas Trudgian 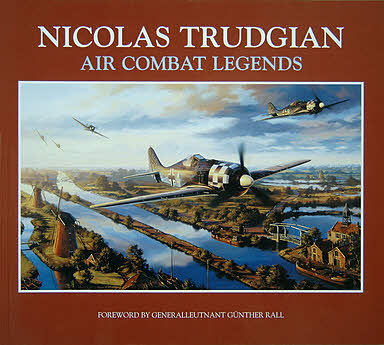 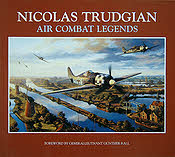 Air Combat Legends Nicolas Trudgian
Description
Nicolas Trudgian - Air Combat Paintings. This superbly compiled book edition gives collectors and enthusiasts alike the opportunity to indulge themselves in one of the finest collections of aviation paintings yet amassed into a single volume. Lavishly produced in "coffee table" style, each volume comes printed in full color with paintings featured on front and back. Foreword is written by Luftwaffe Ace and Chief of Staff of the new German Air Force, General Günther Rall - one of Nicolas Trudgian's legion of devoted admirers. This volume is a must for enthusiasts of the legendary aircraft of World War II, and for connoisseurs of all that is best in aviation art.
Foreword by Guenther Rall:

On a grey, misty November day at my home in the Bavarian mountains, I am gazing at Nicolas Trudgian’s paintings. They are, at the same time, both beautiful yet awesome in their ability to take the memory back half a century in time. The wonderful interplay of light, shadow and colour, reflecting the ever-fleeting movement of clouds across a clear blue sky, sets the artist’s scene for snapshots of aerial warfare, that unique form of combat which, like the boundless domain in which it is fought, changes its shape with every second that passes. Of the scores of combat aircraft that flew during World War II, many became legends in their day, made memorable by the skill, and heroism of the pilots who flew them. In this superbly illustrated collection Nicolas Trudgian, foremost among the new aviation artists, pays tribute to these legendary aircraft and their pilots. From Guy Gibson leading the daring Dambusters to Adolf Galland blasting off in his revolutionary Me262 jet, each painting reveals a level of resolution and colour that has become the hallmark of this superb artist’s work.

I highly commend the fine collection of Nicolas Trudgian’s paintings contained in this volume. They constitute a valuable and faithful record of a cataclysmic era in our history and, for me, serve as a wonderful reminder of a remarkable period in the development of aviation. It is fair to say that the aircraft Nicolas has painted with such skill, truly are Flying Legends!